The store will not work correctly in the case when cookies are disabled.
Account
FREE UK DELIVERY ON ORDERS OVER £30

Give the lasting gift of Beano this Christmas with this comic subscription and Christmas Special bundle.

Designed as a gift for new comic subscribers, this product includes:

Order now safe in the knowledge that comics won’t start arriving until after Christmas. Plus get the benefit of not just a Beano subscription, but also the Christmas Special too.

Your gift recipient will receive weekly issues of the Beano comic, starting with the issue dated 8th January, which will arrive with them between 31st December and 4th January (approximately).

You will receive the Beano Christmas Special book to wrap and gift on Christmas day, when you can tell your gift recipient they have weekly Beano comics to look forward to. The Christmas special will be dispatched to you in December, arriving with you by Saturday 18th December.

About the Beano comic

Crowned Children’s Magazine of the Year 2021, Beano is Britain's favourite comic and home to the Minnie the Minx, Dennis, Gnasher, The Bash Street Kids, Bananman and tons of other characters.

Beano is created with kids aged 7 to 11 in mind, but we know of lots of people – younger and older – who love the crazy comic fun of Beano too.

With a subscription, kids receive Beano delivered to their door each week.

If you’re not looking to give Beano to a new subscriber as a Christmas gift, see the regular comic subscription product listing to start a subscription ASAP.

Download a gift card to give before the first issue arrives

If you like, you can download, print and fold this Christmas-themed voucher into a card to give to the lucky recipient with their Christmas Special so they know they have weekly Beano comics on the way.

Christmas Special: delivered to you by Saturday 18th December (not dispatched before Saturday 10th December).

We recommend ordering now to avoid disappointment: we have limited stock of the Christmas special allocated to this product, and once it’s gone, it’s gone!

Pricing/offers on this page apply to UK delivery addresses only. For international delivery see the “Overseas” tab on the main comic product page.

*Direct Debit offer. £20 every three months (£80 for the first year). Please note that this offer is only available to new subscribers.

Direct Debit is for UK bank accounts only. 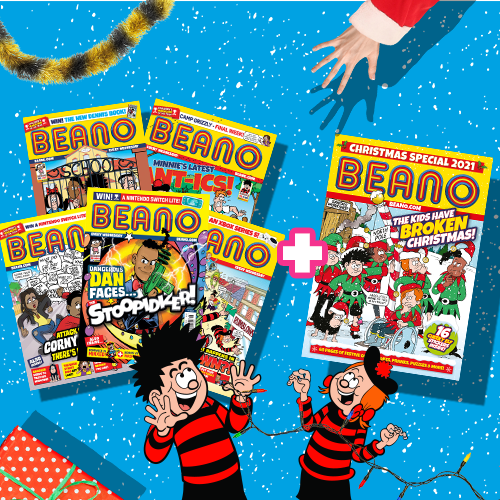