Sink your teeth into this rib-tickling duo of books. Includes The Beano & Dandy Giftbook 2023 and the very latest in Beano's Boomic (BOOk + coMIC) series, The Bogeyman of Bunkerton Castle.

The Beano & Dandy Giftbook 2023: Things That Go Bump In The Night

The Beano & Dandy Giftbook is back for 2023! Each year our giftbooks follow the hilarious exploits of a range of zany classic characters from all across the DC Thomson archives!

This year features a creepy compendium of classic comic strips, ghoulishly good artwork and create features from The Beezer, The Topper, Sparky, Nutty, The Dandy, Beano, and more!

You'll be trick or treated to classic characters like Dennis and Gnasher, Desperate Dan, and Minnie the Mix - alongside their more supernatural pals like Winnie the Witch, Number 13, Hyde and Shriek, and many more!

Featuring the work of great British comic artists like Davey Law, Bob Nixon, Leo Baxendale and many more, you’re sure to chortle with our chums!

What do you get if you mix BOOKS and COMICS? BOOMICS!

When the bogeyman of Bunkerton Castle returns and Lord Snooty flees town, Dennis, Gnasher and friends are dared to spend the night within the fortress's spooky halls.

Will they last until morning? Or will the Bogeyman of Bunkerton Castle prove too scary for them to handle? 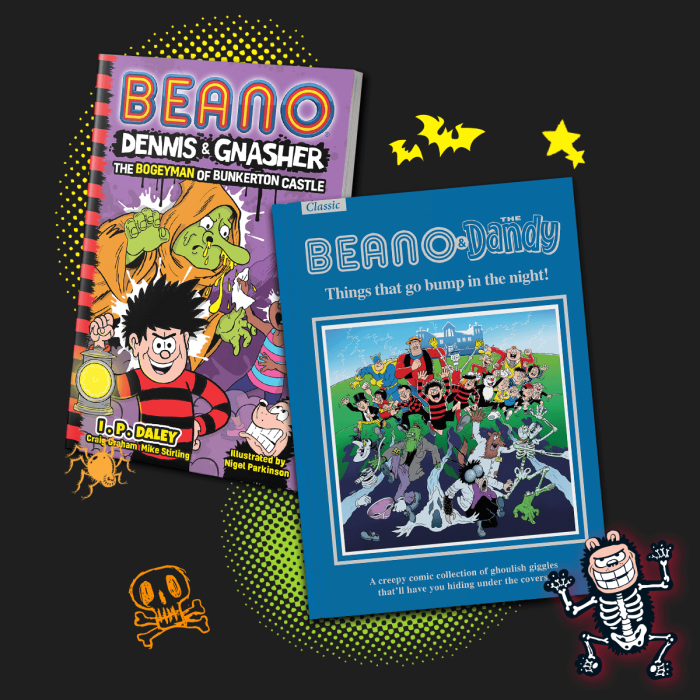